Yesterday afternoon my friend Susan Hess led another class in my kitchen, teaching a group of 13 to make soft cheese at home. Susan has been making cheese for about 10 years, and I have been fortunate enough to enjoy many rounds of delicous cheeses from her kitchen, so last Spring, when I decided that I had to learn to make it myself, I invited her to come teach the class. That class filled to capacity & we had a fabulous time. 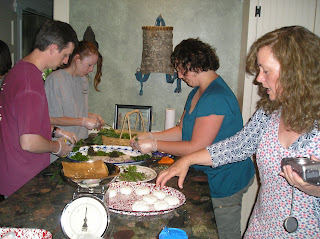 Anyway, because making cheese involves a fair amount of waiting time (2 periods of 12 hours!), Susan starts a batch of cheese the day before teaching a class, so that participants can see the various stages of the process. Somehow, the batch she started for this particular class didn't work properly. Disaster? Of course not! She decided to use it as an opportunity to teach us a bit about troubleshooting during the cheesemaking process. Good thinking, Sue!

So, what happened to the batch of cheese? It started out well. Sue raised the temperature of the raw cow's milk to 160 degrees F to flash pasteurize, then set the pan of milk into the sink in cool water to bring the temperature down to 86 degrees, the magic number for adding the cheese culture. Multi-tasking distractions prevailed, the night air was significantly cooler than it has been for months, and the temperature went well below 86. Oops. Well, soft cheesemaking is a fairly forgiving process, so she added the culture and went to bed. In the morning, it was clear that the whey had not separated from the curd. 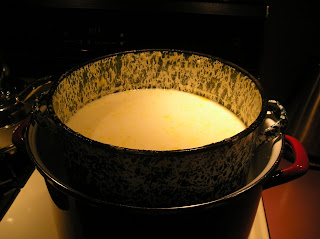 She brought it with her to the class anyway. We decided, with Sue's guidance, to reheat the milk to 86 degrees again, add another packet of culture, and let the milk sit in my kitchen overnight, and hope that it would separate. 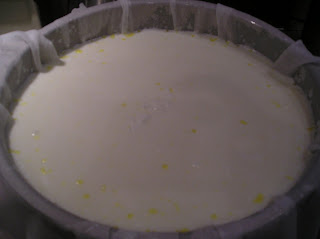 At 6:30 this morning, I checked the progress. There were definite curds, and definite whey, but no firm cake of curd had formed in the middle of the pot. Disappointing, but still not a disaster, I hope. I poured the liquid into a square of butter cloth (which was lining a colander & balanced over a very large glass bowl. Can you see the floating curds?

Next, I tied up the buttercloth & hung it from a knob on my kitchen cabinet. Now it has to strain for 12 hours. Hopefully, the whey will separate clearly enough from the curds so that I can make finished cheese this evening. I'll post again later! 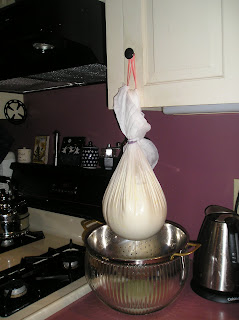 I'm back. At 2:30 this afternoon I bottled the whey that had drained off so far. Two and a half quarts. Things seem to be going smoothly. I'm going to let the bag hang & drain until this evening & then take it down. Hopefully, the cheese left in the bag will be dry enough & solid enough to work with! 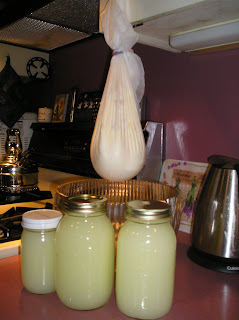 Well, it's 9am the next morning. Late last night I took down the bag of cheese, plopped it into a large bowl, added some exquisite pink salt flakes, and started to mix it up. After 16 hours of draining whey (3 full quarts in all), it was still too moist to form into rounds. Darn. Still, not a disaster though. I had chopped fresh herbs (Parsley, Sage, Rosemary & Thyme. Remember me to one who lives there ...) to roll the formed shapes in, so I just stirred the herbs into the wet cheese, which is quite delicious and the consistency of ricotta. I'll cook with it, and serve it as a cheese dip. Delicious, but different from what I was hoping for.
Posted by Sarah at 9:11 AM

Hi Sarah,
Finally got over to read your whole blog post about the 'experiment'...at least you got something edible and I don't feel like I wasted a gallon of milk! Not sure I'm going to use that particular milk again for a class until I know it can perform without 15 people watching. LOL. Thanks again for trying!

The cheese is actually quite delicious - and we'll be serving it as a cheese dip at our First Friday artist reception tomorrow evening at Radiance. I'm sure it will be popular!