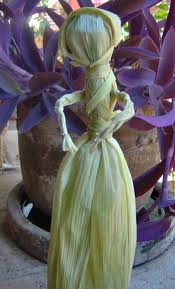 Come make a corn dolly with organic farmer & magical crafter, Beth Weaver-Kreider
Sunday afternoon, August 11, 2013 from 3 until 5pm
in the garden at Herbs from the Labyrinth

A corn dolly is a small figure made of corn husks or straw. Corn dollies are part of the folk customs surrounding the grain harvest in Great Britain and much of Europe. In that part of the world, "corn" originally referred to any grain, especially wheat, and it is grain straw, that goes into making corn dollies. When European colonists came to North America, they brought the tradition with them and began using corn husks, the sacred grain of this land.  In this context, the word "dolly" is probably a variation of the word "idol."
In Europe, it was believed that the spirit of the corn lived in the growing crop, and the dolly gave the corn spirit shelter after the crop was harvested. The dolly was usually burned or ripped apart in the fields before planting time the next spring. Destroying the dolly released the spirit and allowed it to aid another successful harvest.
Join us on Sunday, August 11 at 3pm, in the garden at Herbs from the Labyrinth, LLC, at 1053 Wheatland Avenue, Lancaster.
Cost of the class is $25.  To register, call Radiance at 717-290-1517, or stop in whenever the shop is open, 9 W Grant St, in downtown Lancaster, across the cobblestones from historic Central Market.