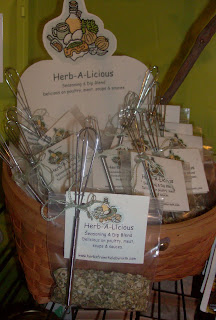 For the past couple of months, I've been working on a salt-free herbal cooking blend, testing & tweaking. As part of the process, I've given bags of each variation to all sorts of people to test for me. Today, Herb-A-Licious makes its public debut! You can see the display we've put in the corner of the shop, and you can shop for some on the web site. Each packet comes with a stainless steel mini-whisk. The delicious blend includes all organic herbs. Minced garlic, minced onion, parsley, Mediterrean oregano, rosemary, thyme, basil, sage and a pinch of cayenne. It's wonderful as a seasoning for poultry, meats, soups and sauces. It's also incredible in dips and salad dressings. Recipes are on the label. It might just become your new favorite spice blend - it's already mine! All this and no salt!
Posted by Sarah at 9:04 AM 2 comments: 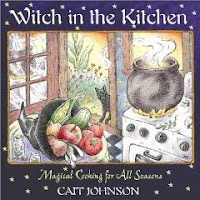 I go through periods of inspired cooking. Fortunately for everyone around me, I am in one of those spells now. Often a new cookbook is the inspiration for my cooking enthusiasm, and when coupled with the changing of the seasons, well ... the cookbook that has me enthralled at the moment is Witch in the Kitchen by Cait Johnson. It's organized by the 8 seasons of the pre-Celtic year, and is full of good recipes made with healthful, whole ingredients. I recommend it highly!

Earlier this week, I made a soup based on a recipe Cait calls Cailleach Soup, a play on words for Kale Leek Soup. The recipe looked a little thin to me, so I added potatoes, and it was perfect.

First, a little about The Cailleach. Mara Freeman writes:

A Dark Goddess of nature, particularly in Scotland, is the Cailleach, a name that came to mean “Old Wife”, but which is literally, “Veiled One,” an epithet often applied to those who belong to hidden worlds. To this name is often added Bheur: ‘sharp’ or ‘shrill’, for she personifies the cutting winds and harshness of the northern winter. She was also known as the daughter of Grianan, the “little sun” which in the old Scottish calendar shines from Hallowmas to Candlemas, followed by the “big sun” of the summer months.

So, you see the timing for this soup is actually divine. Perhaps a perfect offering soup to the spirits of our ancestors. Now, here's the recipe:

Next add 2 cloves of garlic, chopped.

Wash and coarsely chop a bunch of kale. I used a ruffled red variety. Add to pot.

Wash & cut into bite-size pieces 5 new potatoes. Add these to the pot, too.

Simmer until everything is tender. Season with some nice Celtic sea salt & serve!
Posted by Sarah at 7:48 PM No comments: 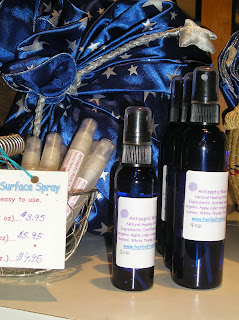 For years, I made an antiseptic spray to use on my own work surfaces when I was making herbal products. The formula changed a little every time I made it, depending on what was closest at hand in the moment. If someone in my household was ill, I'd use the spray when cleaning the sickroom and bathroom. Then last year, a friend asked me to make something for her to take with her on an airplane. And, recently several teachers asked for something to use in their classrooms. It seems that everyone is more "germ conscious" this year. This spray includes several essential oils well-known as antiseptics, including thyme, sage, and ravensara. It is available in 3 sizes; 4 oz, 2 oz and the 1/2 oz travel size. You can purchase it for yourself on my web site or in the shop!
Posted by Sarah at 2:17 PM No comments: 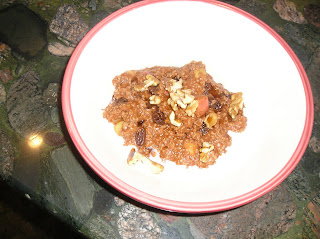 I make this extra-healthy oatmeal 3 or 4 times a week from Autumn through Spring. I include lots of cinnamon to support healthy cholesterol levels, and dried fruit for extra anti-oxidants. My grandmother would have said that this breakfast will "stick to your ribs", keeping you satified and warm all morning long. Often, people ask for the recipe, so I thought I'd post it here with photos taken yesterday morning! 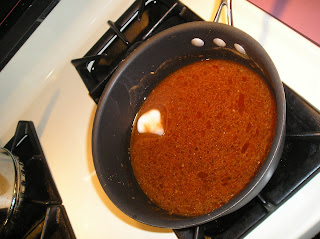 Yes, that's 2 TABLESPOONS of ground cinnamon! I put the ground herbs into the water so that they are absorbed into the oatmeal as it cooks, allowing much more cinnamon & cardamom into each bowl. Imagine sprinkling a Tablespoon of cinnamon onto your already cooked cereal - yuck,too much powder. This way, you can actually ingest a large enough amount to make a real health difference. Bring this to a low boil, stirring to dissolve the herbs.

Coconut oil boils at a lower temperature than water, so you will be able to begin adding the oats a little earlier than if you were using just water. Stirring constantly, slowly add 3/4 Cup of Scottish Oats, sprinkling and incorporating a little bit at a time so that no lumps form. Reduce heat to medium.

Add 1/2 Cup raisins or other dried fruit. Blueberries, cranberries and cherries are all very nice. You can use apricots, figs or prunes, but you'll need to cut them into smaller pieces first. Core an apple, chop it up and add that to the pot. 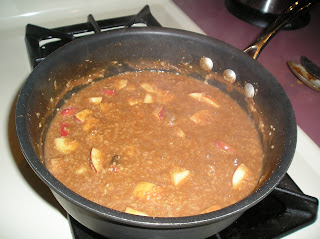 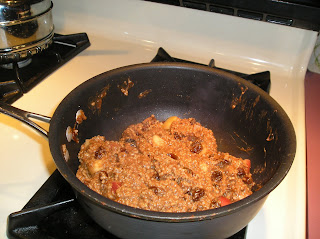 Spoon into bowls, top with walnut pieces, maple syrup and milk. Heavenly! Serves 2-4.
Posted by Sarah at 10:29 AM No comments: